This specific ISBN edition is currently not available. View all copies of this ISBN edition:. Synopsis About this title The magic and mayhem continue in this thrilling second instalment of Hobb's new series.

Review : High heroic fantasy has rarely paid enough attention to ships and sailors, the lifeblood, after all, of trade and survival in a non-technological world. Buy New Learn more about this copy. About AbeBooks. Other Popular Editions of the Same Title. Spectra, Hardcover. Search for all books with this author and title.

Customers who bought this item also bought. Stock Image. Published by Voyager Kennit and his two ships return to Divvytown to find it has been ransacked, and Wintrow talks the survivors out of killing him, Kennit, and Etta. Kennit decides that Wintrow must go to the Other's Isle and receive a prophecy. When they get there, Wintrow goes off to look along the beach, but instead of an artifact, finds a path that leads him to a cage with a trapped serpent.

Taking pity on her, he breaks her out of the cage, and she in turn helps return Wintrow, Kennit, and Etta to Vivacia. The serpent he rescues is She Who Remembers, whom the Others have imprisoned as their oracle. Althea is serving aboard the liveship Ophelia. A Chalcedean galley stops her in the pirate isles and demands to board and check her cargo. Captain Tenira believes this to be piracy and refuses to allow it, even when they claim to have the writ of the Satrap. They fight, and Ophelia herself damages the galley enough that they can escape, but she is burned. When they return to Bingtown, Captain Tenira discovers that the Satrap's customs officials believe they can claim as big a bribe as they want to let him through.

He refuses, and they tie Ophelia up at the customs dock. Althea goes to her family and tries to convince them to join with the Teniras in standing up to the Satrap, but it's tough going. Meanwhile, Brashen has been serving with a pirate when he's called upon to help dispose of a piece of pirate booty—a painting that he knows was Althea's, from Vivacia. He had heard the rumors that Kennit had captured Vivacia but didn't believe it. 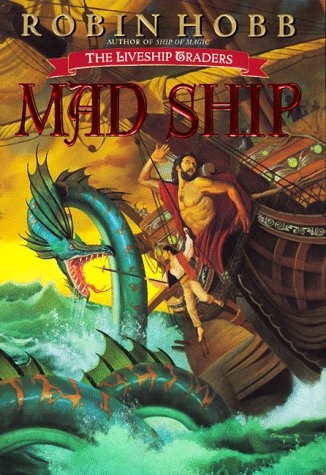 Now he does, so he agrees to go to Bingtown to try to get a top price for some of the stolen stuff, but he jumps ship and goes to the Vestrits. Althea of course wants to arrange a rescue, but they quickly realize that nobody is going to be willing to mount a rescue mission. Davad Restart has already been handling negotiations for the Ludlucks to sell Paragon, and between Amber's own wealth and the other money they can come up with, they manage to do it.

Things are getting bad with the politics in Bingtown, with more of the Old Traders starting to realize that they have to stand up to the Satrap and his Chalcedean mercenaries, but Paragon leaves before the war hits. Malta continues to be a horrid spoiled child shamelessly playing Reyn and Cerwin against each other, apparently only interested in who can give her the most goodies. Excellent character development, evenly paced plot, interesting world building and some jaw dropping revelations.

As a storyteller, Robin Hobb really knows how to engage the reader and make them care deeply for her characters. This book continues straight on from the previous without missing a beat.

Its the second book of a unified trilogy so in that regard it does suffer a little from being the middle book in that it doesn't have the same novelty as the first nor the resolution of the last. Havi Excellent character development, evenly paced plot, interesting world building and some jaw dropping revelations.

Having said that, by no means does this book simply tread water while we wait to read the third book. The plot is advancing, the characters are continuing to grow and develop, and the lore of the world, especially the dragon lore, is being expanded. We visit the Rain Wilds, we see the Elderling cities, and we learn of the relationship between the serpents and dragons and liveships and we even learn more of the dragons of the Farseer Trilogy.

As the title would suggest, the liveship Paragon gets more of a focus this book.

We get glimpses of why he is the way he is and we get some clues of what may have happened to tip him over the edge. Everything is not as it seems. Malta's character was a surprise. She starts off as naive and rather shallow but out of all the characters she probably grew the most as the events in the larger world eventually threaten to swamp her hopes and dreams and childhood fancies.

As any who has read the Farseer Trilogy and the first book of this trilogy may know, Hobb likes to pound her characters on the anvil of adversity. Development for her characters comes at a cost that often has me wincing. Last book she took a finger and a leg, and this book there are more losses and sacrifices to be endured.

George RR Martin may like to kill off his characters to keep the suspense real, but Hobb does the same by letting them live - not that all will live of course. Thoroughly enjoyable A solid 4 to 4. This definitely felt like the middle book in a trilogy. With the exception of Malta, there wasn't really much character development to speak of. It pretty much felt like they were all just treading water, waiting for their cues in the final book to finally spring into action.

While the author definitely has some writing skill and is able to create some layered and interesting characters, delving into the minutia of their every thought does not equate to character development. I don't need to rea This definitely felt like the middle book in a trilogy.

And I don't need to read about the upteenth scheme of Kennit's to know he's a narcisstic, manipulative bastard. At some point it just becomes redundant. I promise, dear author, I get it. My overwhelming impression of this book is that not a lot really happens in this page story my mass market paperback edition.

I'd wager that at least a third, if not a full half, of the pages could've been dropped without losing anything earth-shatteringly important. Hopefully the third and final book is paced better. This is the second book in the Liveship Trader's trilogy and I thought it was brilliant!

As I read more of Robin Hobb's work I am slowly falling more and more in love. This trilogy follows many characters and spans not only land but the ocean as well. We primarily follow a young lady called Althea as she attempts to save her families liveship a liveship is a ship that has a living figurehead. Not only do we sail the sea with Althea, we also hear of pirates, dragons and magical tree-top cities. This trilogy honestly has such an array of exciting things going on I'm sure there is something for everyone to love! Despite taking me almost a full two months to read, I still found this book absolutely compelling.

Plotted so well. Characters so, so strong - Robin Hobb's bread and butter is of course her characters. This series continues to blow Farseer out of the water and I liked Farseer, but recognize its many weaknesses. Ah ok.. Is he good? Is he bad?.. Probably not even close. Now excuse me while I run to start Ship of Destiny! But still, this series continues to be everything I want in fantasy, and more.

Jan 06, Mark Harrison rated it it was amazing. Superb middle book of an amazing series. Excellent development of some of the major characters, particularly Malta from bitch to fave, sea battles, romance, political intrigue, revelations about where the River Wild Traders obtain wizardwood, betrayal and some sad losses. A brilliant series - right up there with the best I have read. Apparently all it takes is pages of setup for Hobb to get into her stride.

All of the setup that she did in the first book pays off here, especially since the characters are coming together and there are fewer narrative threads to follow.

I'm really glad I stuck with this series, because it's really original and full of interesting, nuanced female characters. The one exception to that rule is Amber, who I'm guessing view spoiler [will be some sort of deus ex machina, or what Matt calls the "Kalinda" from The Good Wife - if there's an insurmountable problem, Kalinda solves it by the end of the minute episode, and Amber is already too convenient for the plot hide spoiler ].

But that's a minor quibble. Some other thoughts: view spoiler [- I loved to hate Malta in the last book, and now I look forward to reading from her perspective. The character development that she goes through here is certainly believable, but I wish it had been a bit more gradual - it's like a switch gets flipped and she immediately thinks differently about her situation. The best Malta moment is when she snaps at the Satrap and recognizes the tone as the one that her grandmother used to use with her. They're basically scavengers living in the forest, which is interesting but not quite as mysterious as I was hoping.